skip to main | skip to sidebar

running as exploration? what a novel concept...

i decided to shift away from the usual routes and try a new one today, through this fancy- pants neighborhood [yarrow point] in kirkland chocked full of some of the most gorgeous [and _expensive_] homes i've seen in the seattle area [including quite a few very impressive modern masterpieces] complete with some breath-taking views of lake washington [and killer hills]. 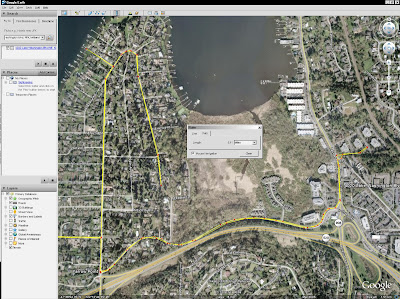 it's really nice to shake off some of the structure of marathon training post race, to really milk a bit more enjoyment out of what running as exploration can provide.

the seattle marathon: what did i expect?...

so it's come and gone- the marathon i dreaded and looked forward to equally from the second i pushed "send" on the registration site. at around mile 23 or so yesterday i realized that i'd sorta set myself up for a ho hum situation...
sure every marathon finish is a "win", but for somebody who expects a little more than just completing a task from the effort, i realized that this time around, i hadn't really set a goal that i'd be very proud of.

upon completing my first marathon there was obviously quite a feeling of accomplishment for finishing period- and especially in under 4 hours. the second time around, i was able to set another personal record and @ 3:17, it had whetted my appetite for boston qualification. on my third marathon i learned a valuable lesson about seeking out fast courses [which napa was] and in doing so, picked tucson for my 4th PR attempt, and captured boston in the process.

after moving up to the hilly & rainy northwest though, my training has suffered a bit, and although i've tried convincing myself [regardless of the title of this blog] that i'm happy just adding another notch to my belt by finishing/ finishing in under 3:30... i don't think that it is.

so with that being said, i think after a small break i'm going to evaluate whether or not i think i'll be able to give an honest crack at a sub 3:00 [or at least boston qualifying sub 3:10], in the spring of next year. if not, then i might just lay off until jen & i are able to run new york together [a race that i'm _very_much_ looking forward to].

hmmm... i suppose i should talk about the seattle marathon a bit too...

first off, i ran a 3:27:31, the second half being a whopping 10 min. slower that the first [not good], averaging a 7:55 minute/ mile- erg!
and it never ceases to amaze me how poorly i pace myself by going out too quickly [6:40 first mile],
although like i mentioned, it didn't help that my garmin GPS, which i've become so dependent on for pacing, completely let me down.

very foggy, which made for some nice running whether, BUT!! ruined quite a bit of the vistas i was looking forward too,
and rendered my garmin GPS completely useless- no pacing, so splits, no credit for the mileage, and couldn't even read the time!
also... it was _NOT_ a fast course. aside from just looking at how far off the winner was from the world record [almost 30 minutes!],
it was quite hilly [the steep inclines in the last 5-6 miles was like a combo slap in the face and kick in the balls],
and by far the most winding course that i've ever run. yes. you can see that from the course map, but sometimes it takes some seeing something in person for it to really sink in.

oh! and the organization at the beginning of the race- bonkers! the event was split into marathon run, marathon walk, half marathon run, and half marathon run,
with nobody [that i could tell] to let the runners know where to go while waiting for their races.
and the announcers were 2 people who i seriously doubt had ever run anything over a mile, and had no apparent knowledge of anything marathon related.
oh! and a kid calling out splits at mile 24 was over 20 minutes off of the time!

hmmm... so in the end, i'm always glad i ran the course, but i'd seriously have to consider running this to anyone that doesn't live nearby-
and definitely would not recommend it as a boston qualifier or PR.

ok. that's it. had to get it out. there probably won't be another update until i decide on my next marathon.